How do you promote two of Castlemaine’s premier eating and drinking establishments during the Castlemaine State Festival? You create a mobile wrestling ring that features a rabbit, a luchador, two chillies, two carrots and one molto loco referee. Oh and a wrangler resplendent is a black velvet suit (aka Gav) 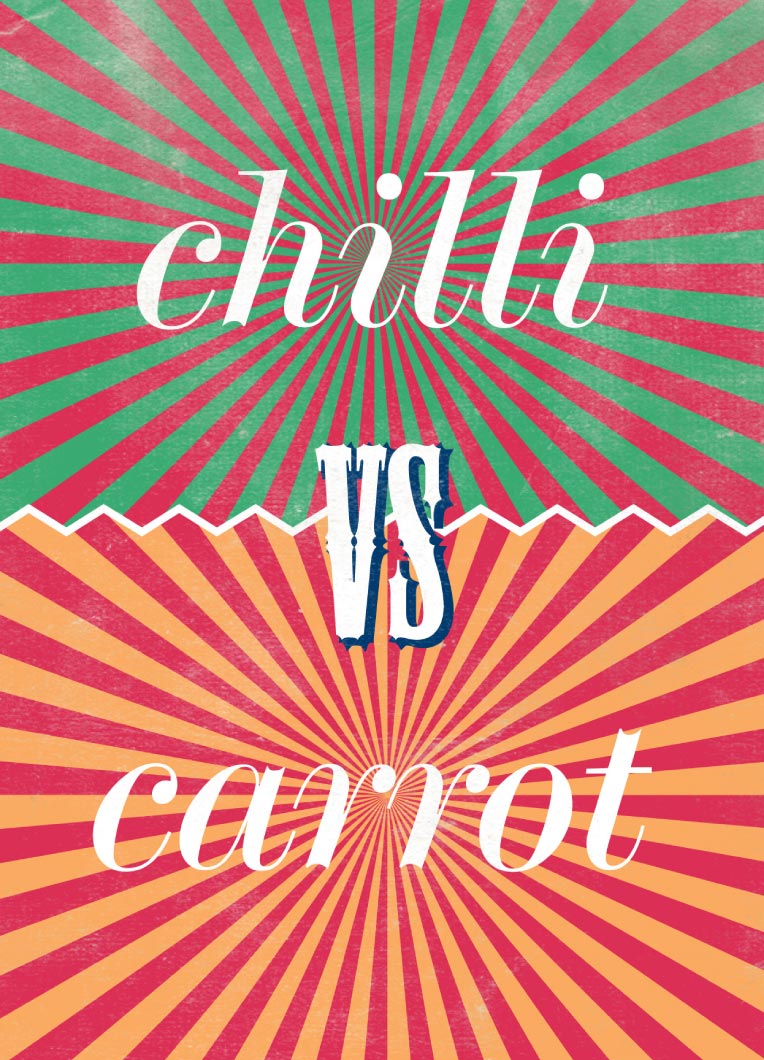 The Good Table and the Theatre Royal came to us wanting to create awareness and drive traffic to their venues during the Castlemaine State Festival — a biennial 10 day music, theatre and arts festival.

The Good Table restaurant also runs Hickster Bar — their music and drink venue on the best balcony in Castlemaine, overlooking the intersection of Barker and Templeton Streets. The Theatre Royal is a Castlemaine instution (the oldest continually operating theatre on the Australian mainland don’t you know). Throughout the festival they were setting up The Corona Street Cafe to tie in with their permanent Arribar! Mexicantina restaurant. Then of course there were their State Festival performances, movies, ice cream and all round magnetic-place-to-be-ness.

The idea came to us when Tim Sproal of The Good Table said “We want to dangle a carrot in front of them.” So we thought “Mmmmmmm, a carrot could represent The Good Table / Hickster Bar and a chilli could represent the Theatre Royal / Arribar! Mexicantina / The Corona Street Cafe”. Thus  chilli vs carrot was born. Then we thought how can we give this contest some kapow? With a mobile wrestling ring of course. We got two carrot costumes, two chilli costumes and convinced some people to dress up and be the wrestling ring ‘corners’ by holding some red ropes. Then with someone dressed as a rabbit costume and someone as a luchador (Mexican wrestler a’la Jack Black in Nacho Libre — a superlative fillum) we had them wrestle each other. To draw attention to themselves they made lots of noise with whistles, bells and clangy bang-bang things. A referee was drafted, complete with serape and sombrero, who spruiked the performance and there was also a wrangler to, well, wrangle everyone. It was actually Gav. He also handed out flyers that explained the whole chilli vs carrot thing and promoted the venues, detailing special festival offers with an  illustrated map showing how to get from one venue to the other. 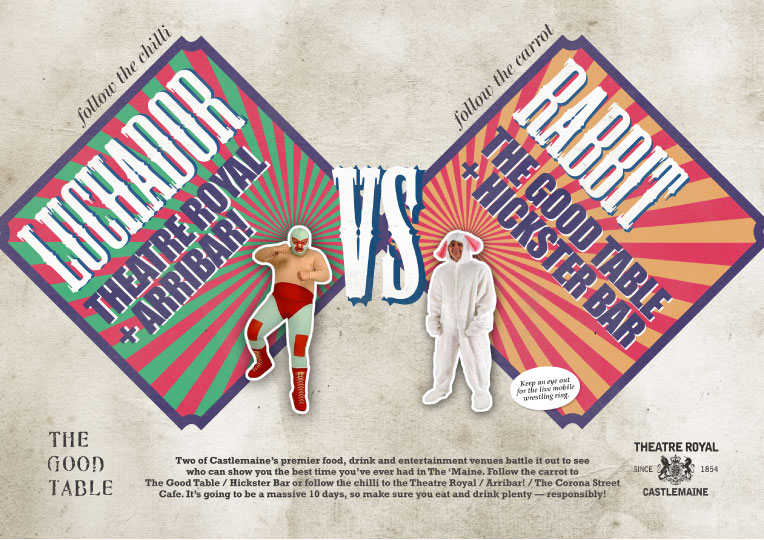 A few days before opening night we put up a fly poster campaign in between the two venues — a less than 10  minute walk from one to the other. One poster said ‘follow the chilli’, the other ‘follow the carrot’. They also had either a real carrot or a real chilli on them. 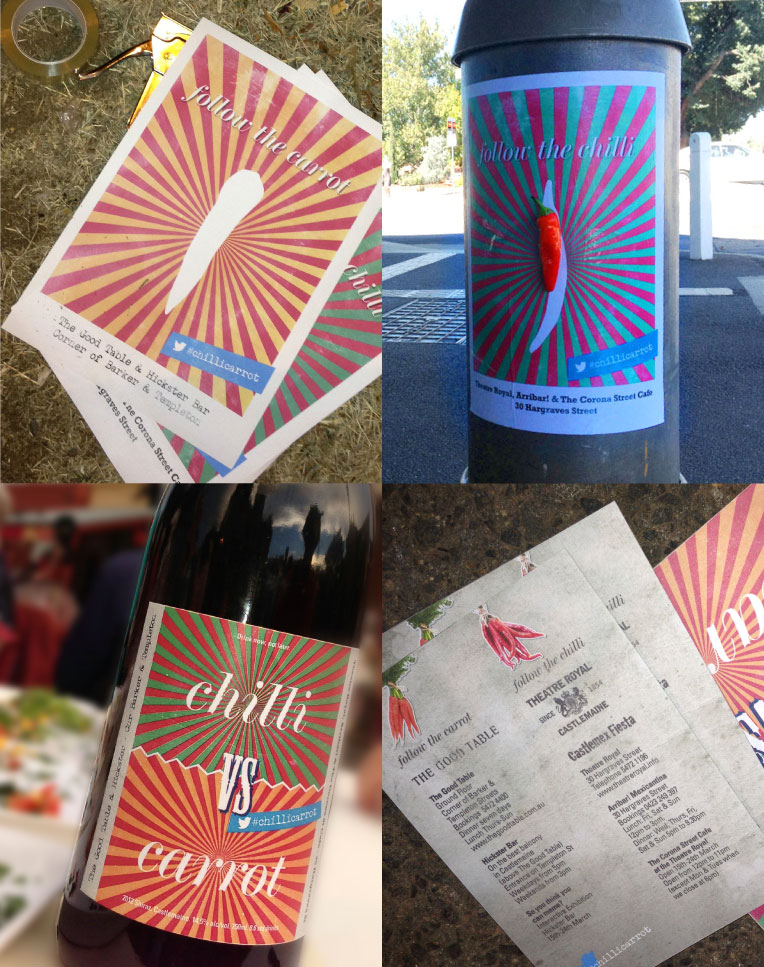 We kicked off on the opening night of the State Festival. As Cornucopia — a 1500 strong seated street party — was a pre-sold out ticketed event we knew there were going to be lots of people milling about before it started, so we entertained the waiting crowds. During the Cornucopia performance the Chilli Carrot team handed out free food (choripan from The Good Table) and #chillicarrot wine (made by Minim wines) to diners at the event while remaining respectful at all times to the Cornucopia performers. And of course more flyers were handed out.

The campaign continued throughout the 10 day festival. Flyers were handed out by the chillis and the carrots and where large crowds were gathering there was more wrestling. Added to this was #chillicarrot tweeting, facebook posting and website updating. 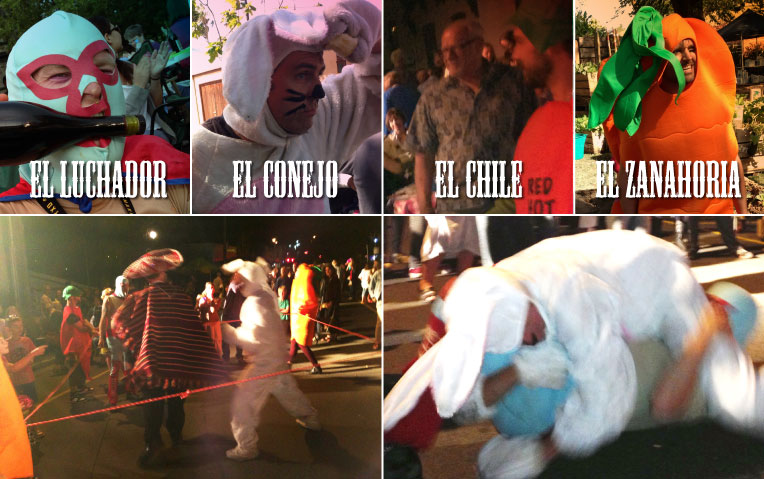 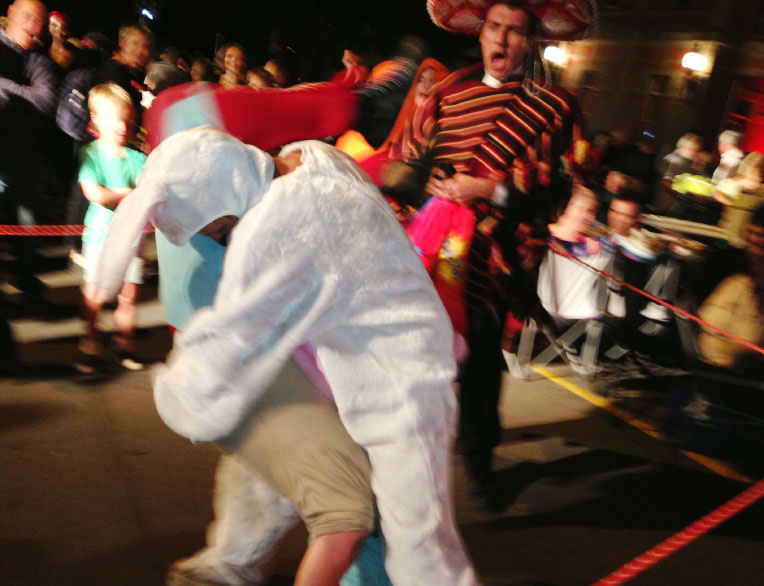 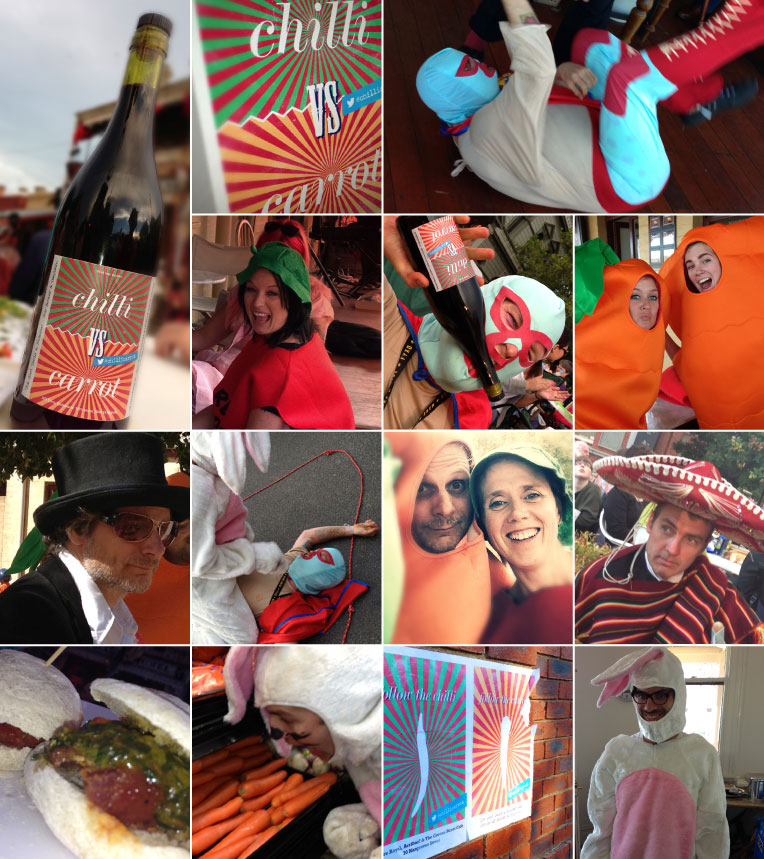 Thanks to everyone who dressed up and embraced the whole spirit of the idea. Muchas gracias especial to Chris O’Connor for never missing a chance to referee.

Note: Chilli vs carrot was not part of the Castlemaine State Festival, merely an homage to the spirit of the biennial 10 day arts event.

The Good Table is a local restaurant offering a daily menu that celebrates quality ingredients; seasonally sourced, locally grown, with emphasis on free range, organic and sustainable produce. They work with the region’s smaller growers and producers and share a passion for quality food and a commitment to the welfare of the animals.

Theatre Royal is the oldest continually operating theatre on the Australian mainland. They offer a cinema, bar, courtyard, Arribar! Mexicantina, Met Opera broadcasts, a monthly artists’ market and copious amounts of live music. To us here at Chops for Tea we think beer and ice cream in the one venue is genius! Everyone’s happy.