I’m not a big rabbit fan. Well that’s not true, I love Bugs Bunny, Peter Rabbit and when I was growing up in London we had 19 very cute rabbits at one stage. And who doesn’t adore Welsh Rabbit? { That’s Welsh Rarebit Gavin! ~ Lizzie }  But when it comes to eating rabbit I often shy away, until now… 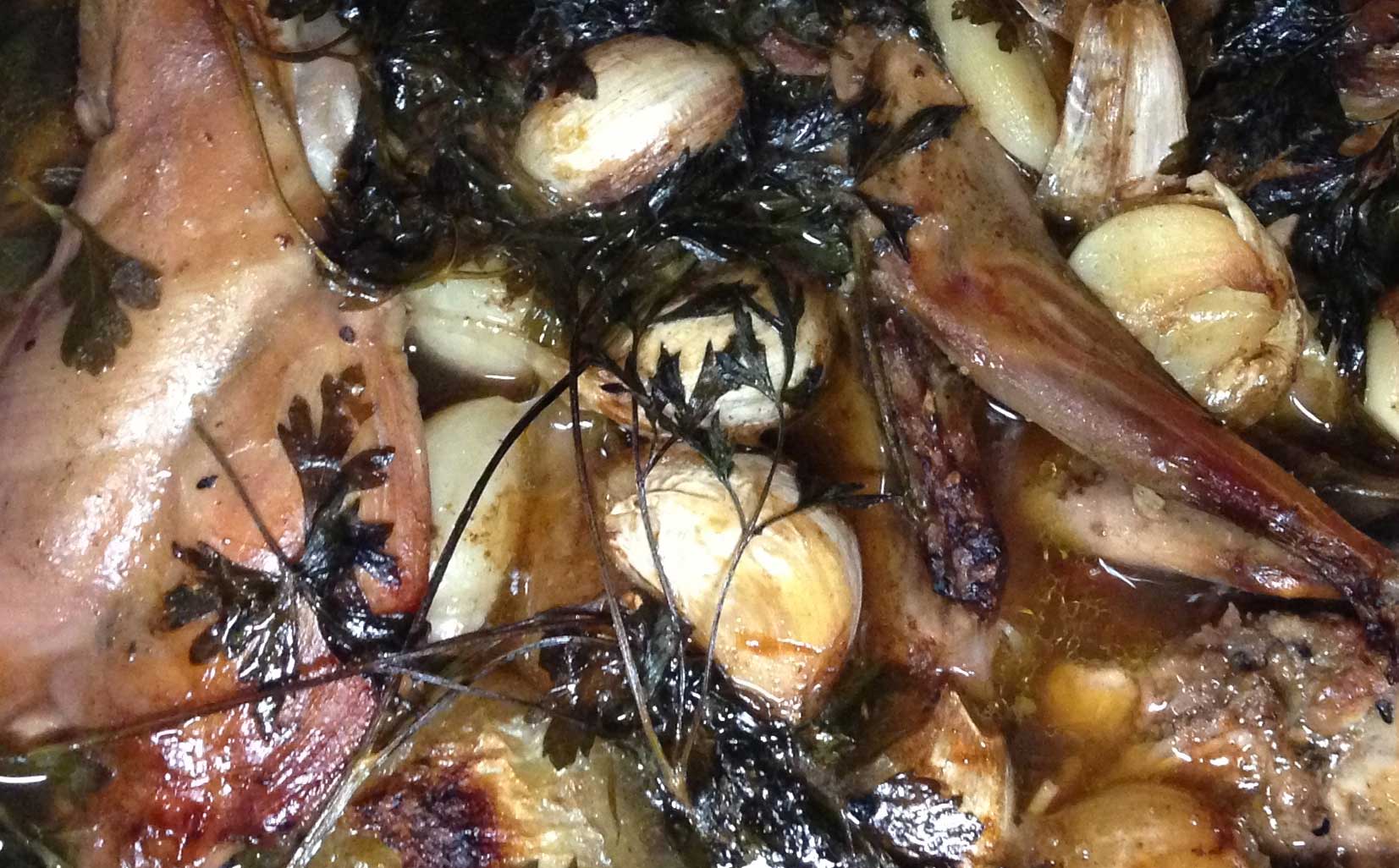 For the 2nd year running, over the xmas break I have found myself on the back of a ute holding a 22 calibre rifle. The aim (forgive the pun) to bag a brace of wild rabbit and thus help with general pest control at Pine Vale, the Geddes family farm, some 3700 acres of wheat & sheep country located at Binya, NSW 30km due east of Griffith, approx 5 hrs north of Melbourne & 7hrs west of Sydney. So it’s cousin Joy that I have to thank for developing my taste for the old hoppity hoppity. Well actually it was the grandsons of Joy’s neighbours who have the whole rabbit shooting ute setup.

At first  I was reluctant to go out shooting rabbit. Why? I guess growing up in London rabbits are seen more as pets than food and I definitely wasn’t exposed to rifles and shooting stuff (fortunately) in the middle class suburbia I grew up in. So it just wasn’t in my veins – unlike most meat that I eat.

Arguably hunting animals for meat is what we’ve done for nearly 2 million years so whilst I haven’t been inclined to go kill a lamb, pig or cow, as this is conveniently done for me, a chance to eat what I’ve hunted down is quite refreshing. [insert moral debate Vegetarians Vs Carnivores] Once you have grappled with your conscious (meat lovers) it’s time to go get some dinner.

Being driven at speed across paddocks in the middle of a warm summer night is really quite exhilarating. And when you add in a rifle slung over your shoulder… well I think they call it the thrill of the chase. Not that we are really chasing the rabbit, more searching the land with a high powered beam – looking for those eyes. Red eyes, not blues eyes. Remember: blue eyes = sheep. Very important not to hit the sheep seeing as they’re actually only there to be sold on. Oh and did I mention the foxes? Enemy number one to Mr & Mrs Chook and definitely not a friend to Mr. farmer.

We can be driving for 10 or 20 minutes in any direction but the guys know the best spots. Ashley & Blake grew up on the neighbouring farm and know the contours of this land like the backs of their hands. And these boys know guns too – shooting is most definitely in their veins. And then we spot ’em. We stop the ute. There are rabbits a plenty here. We take aim, we fire. It’s a challenge, a shot goes astray, it’s not easy picking out a rabbit as it turns and runs. And we aim for a clean shot to the head, it’s the quickest way and it also ensures the meat will be good. We bag a couple here, in fact by the end of the night we’ve shot seven rabbits in total and a number of foxes.

Once you accept that the rabbit you’re shooting is just part of life on the farm and it’s directly related to the farm’s survival the whole event takes on new meaning. This is a necessity but a tasty one. We get back to the farm house and Blake expertly guts and skins the rabbits. It’s 3 am, we sit back and drink a beer and think about how we’re going to cook our bunnies. 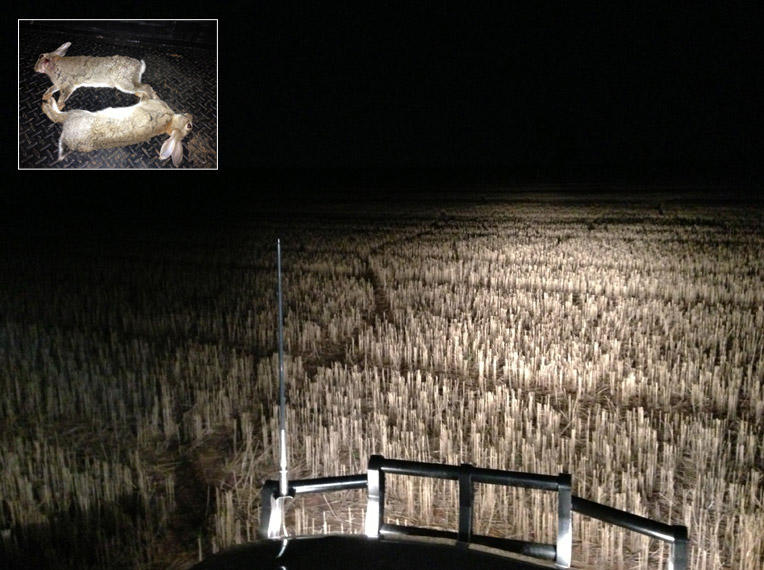 The following morning we begin to prepare our rabbit feast.

I can’t lay claim to this recipe, we have Furgus Henderson to thank for this. He’s the chef of St. John restaurant in London and author of Nose To Tail Eating. Here’s how to enjoy your freshly killed rabbit, note we actually cooked our dish for about 3 hours on a lower heat. And the taste, well yes there’s lots of garlic there (80 cloves) but the white rabbit meat is strong and flavoursome and is soft and tender and to be honest not to far away from the taste of a chicken but with less fat and I’d thoroughly recommend it and even better if you know where your rabbit has come from. 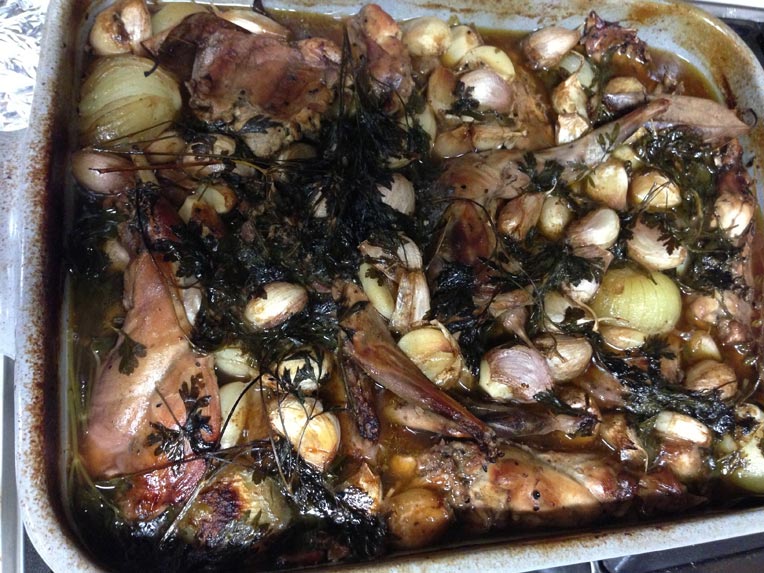 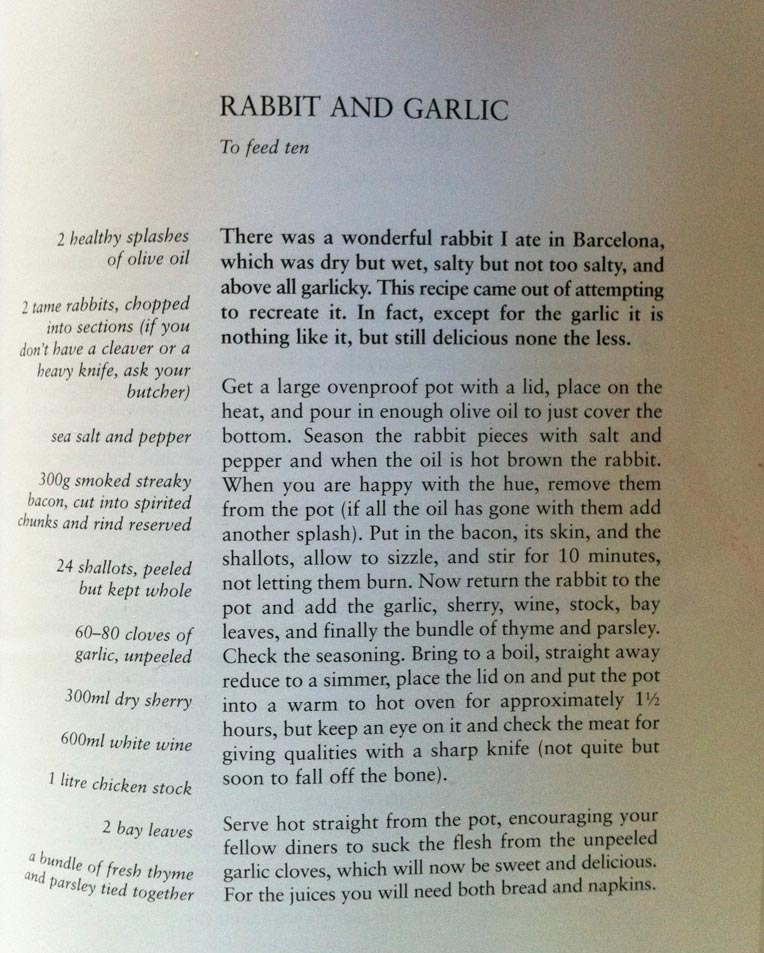 { Is now the appropriate moment to reveal the fact I’ve been having vegan thoughts? ~ Lizzie }