The Castlemaine State Festival started in the 1970s and is a biannual event.
Since our arrival in Australia we’d yet to experience its wonders though we certainly made up for it this year.
Here’s a taste of what we saw and what we loved. Comments are by Liz and Gav. 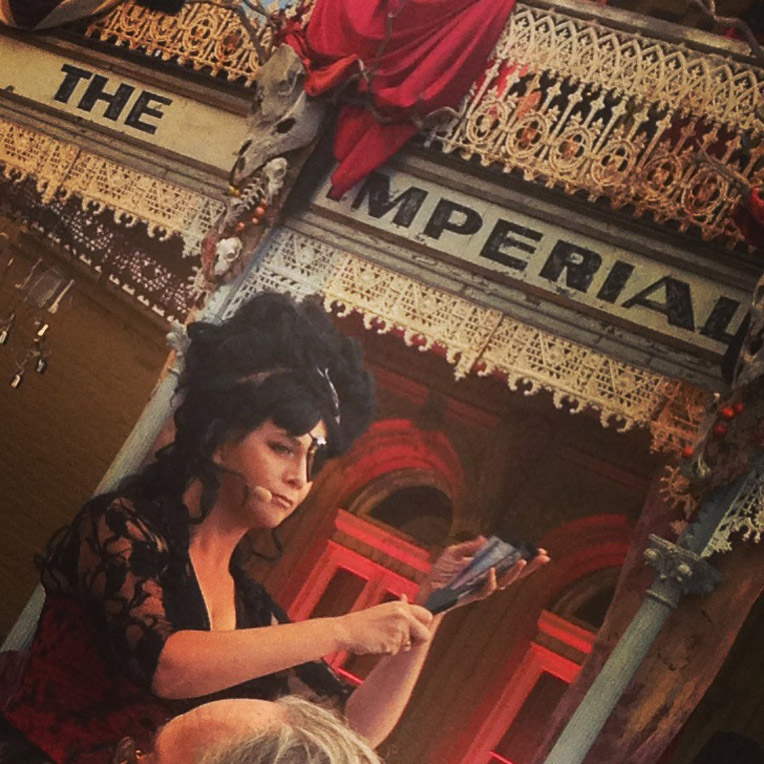 We were lucky enough to catch some great performances and see some great shows.

Cornucopia — opening night party on Lyttleton St. Concept and direction by Jude Anderson and Punctum: “If Castlemaine were a musical restaurant this would be it.” What a spectacle this was. Over 1500 people enjoyed delightful performances, singing, dancing and playful theatre. The costumes and details were so well considered and the event was wonderfully executed. And the stunning backdrop of Castlemaine’s historic buildings added to the super charged atmosphere – a great way to kick off the festival. 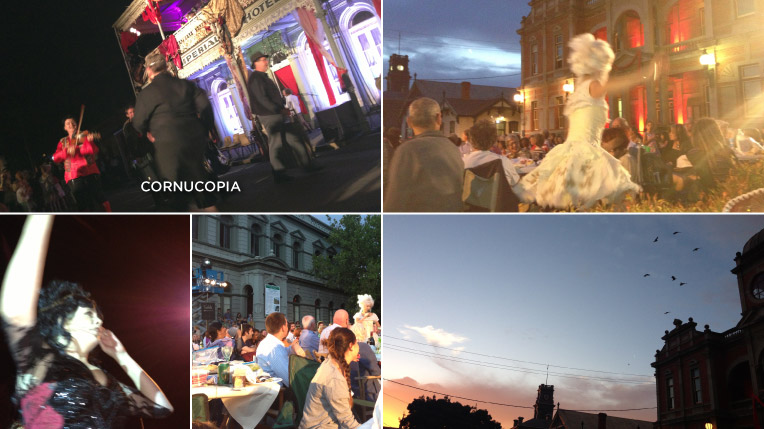 Wulamanayuwi and the Seven Pamanui — a  mix of European fairytales with Dreamtime characters. Gav and #1 saw this. The clip below doesn’t do this show justice – funny, sad and extremely entertaining (we are almost in tears).

The Man who Planted Trees — well #1 was lucky enough to see this as part of the School’s program. She remembers ‘the dog farting’. Deep thinker my kid.

The Necks — Truly an amazing gig. The celebrated Sydney trio were in fine form performing their mix of avant-garde/ambient/jazz to be honest it defies catagorisation – their music is a unique fusion of piano, bass and drum if you’ve not heard them you should, spellbinding. The Necks “Guelph” Live (HD, Official)

The Castlemaine Festrival Clubrooms — The Allstars: an enquiry into the philosophy of idiocy. Punctum again, directed by Jude Anderson. With Nathan Edwards, Penny Larkins, Paddy O’Sullivan, Carl Pannuzzo and Mary Thorpe. Super bloody funny in a semi-mime slapstick sort of way. Costumes were so perfect.

The Republic of Trees — mesmerisingly staged in the open air at Vaughan Springs Reserve. Cosimo Piovasco di Rondò, even just saying the protagonist’s name is a lyrical treat. {The Baron in the Trees (1957, Il Barone Rampante) by Italo Calvino}

The Idiots of Ants — It started out with guffaws in all the right places, then I got a phone call from my mother who was babysitting. #2 had kicked off massively so I had to duck home. I missed the rest but Gav said they were ace. So we went for cracking meal at The Good Table to compensate.

Final day celebrations in Victory Park — where #1 sang with other school children – a specially written song. This was a lovely way to end the festival. The Living Stage: Iron Chef meets Naked Chef but that’s Beau Cook in blue so add MasterChef to that to. 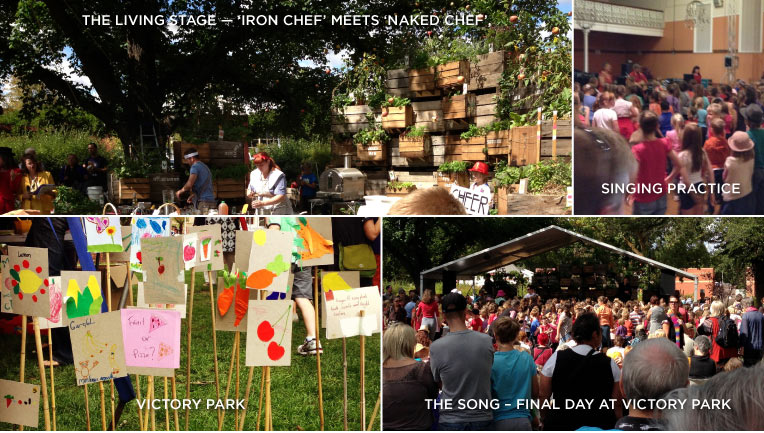 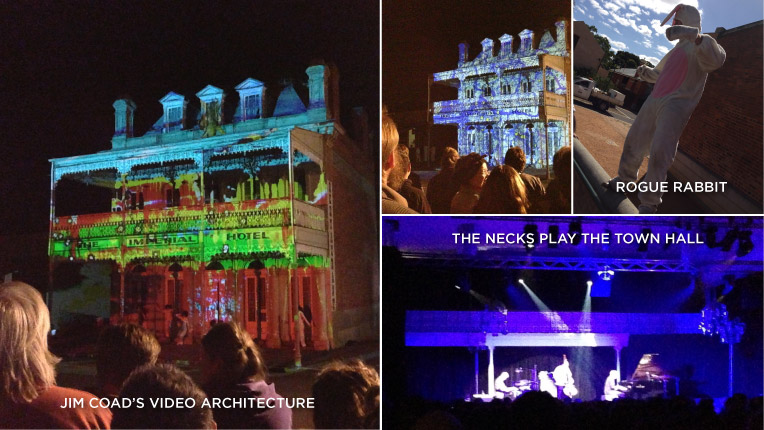 Trace, Video Architecture, a collaboration between Jim Coad, Gabrielle Brauer, Mandy Field and local young artists was just mesmerising and picked up wonderfully on the vibe around town at 9.30 on the final Saturday night of the festival. You can see an example of the work they did at the Castlemaine Martket Hall a few years ago, Just lovely.  http://www.youtube.com

We have differing view on the Periscope exhibition. Gav loved it (well some of it): favourite bits mentioned below. Liz on the other hand had a bit of a different experience when nasty curator lady did not make our visit pleasant at all, thus: there was no need to be rude to my children BEFORE they had a look around just in case they touched something. There is a way of delivering a warning without aggression and condescension. Consequently #1 thought all artists were scary and rude and didn’t want to see ‘any more art’. Another family mentioned a similar interaction with said curator when they visited. Shame — only blip on an otherwise enjoyable 10 days.

Crime & Punishment by Clayton Tremlett — set in the old police lock up, you’re given a torch to view the work (a beautfully produced book) and read about the criminals that spent time in the lock up, for such crimes as sex with a kangaroo. Inspired!

The Elaboratory and the elixir of life: An apothecary’s wonderment.  An installation by Tara Gilbee at the historic Tutes miners cottage. This examined the esoteric aspects of alchemy in her metaphorical laboratory! http://www.youtube.com 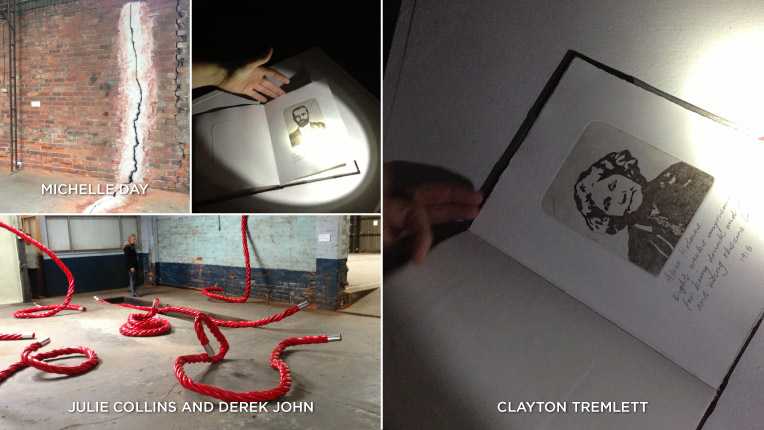 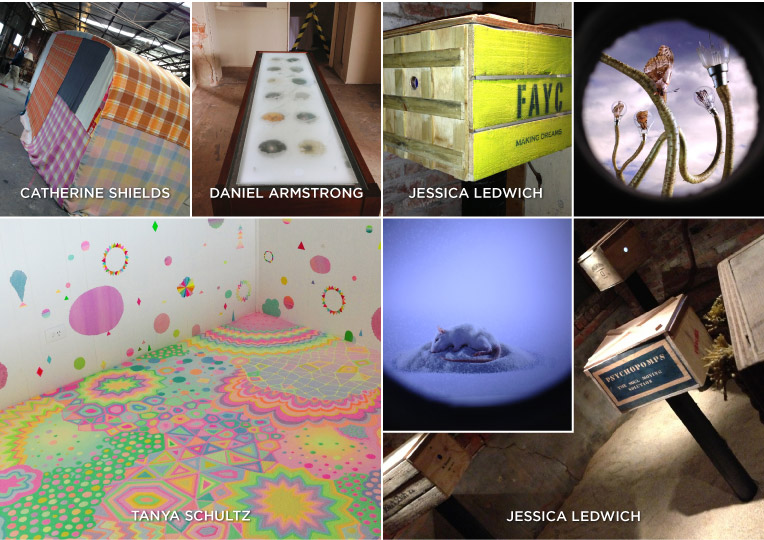 Roger McKindley’s Antares Iron Art out near Newstead. A junkyard (unfair appellation) has never been so calming.

Text Alley, curated by Clayton Tremlett, also needs a mention here. Great controversy was caused by the “Christmas is a Lie” image that adorned Frederick Street. And along with ‘Let Bogans Be Bogans” the Year 10 students from Castlemaine Secondary college did a great job. The title of the project was called we All Make Mistapes – except everything here was spot on!

Gav also saw the Rail Domino which was another super addition to the festival and featured an amazing Heath Robinson like contraption that set a bowling ball in motion that eventually unlocked a rolling carriage (with up to 5 children on board) which traveled 100m down a dedicated rail track. Great fun! 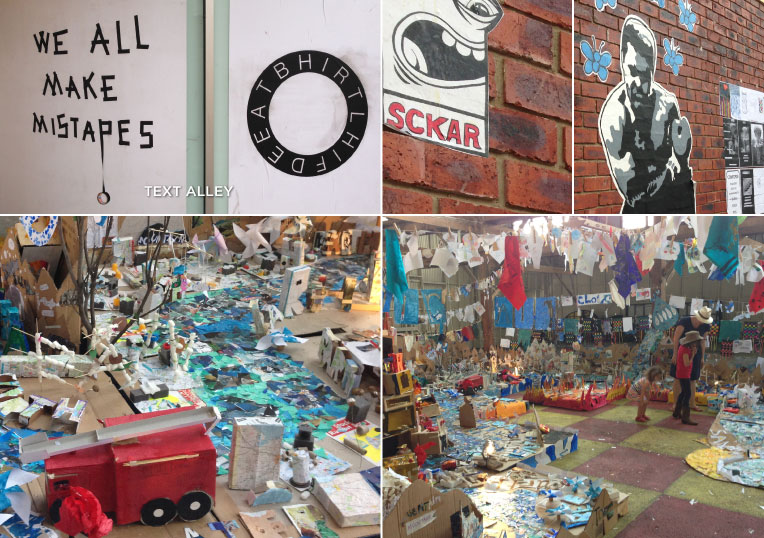 Wait!
We also saw an installation by primary school aged students in a shed behind The Public Inn. Elemental was a mass of bright cardboard construction, beautifully painted by the children and put together by a team. #1 showed us part of a river she made!

Last but not least,
So You Think You Can Meme?

Gav (along with fellow Castlemaine Web Pixel Beer chums, notably James Kelly & Hugh Campbell) instigated a print and interactive exhibition where the public could meme (it’s a noun but methinks it can be a verb too?) via their mobile phone and then it was displayed on a screen.Here’s Gav’s ramble on it…

Our group is a mixture of graphic designers, web designers and tech types (ahem, geeks). The idea was to generate a concept that fused our many talents together and So You Think You Can Meme? was born (at the pub). 10 members of the group each produced/submitted a titled image, these included such beauties as a dead goldfish, a rooster (Tony’s Cock) & tree hugger. In all there we 100 frames with witty, dark but mostly disturbing comments to inspire users to create their own version, via the mobile app. They’ll be more on this soon. The exhibition was held at Hickster Bar above The Good Table 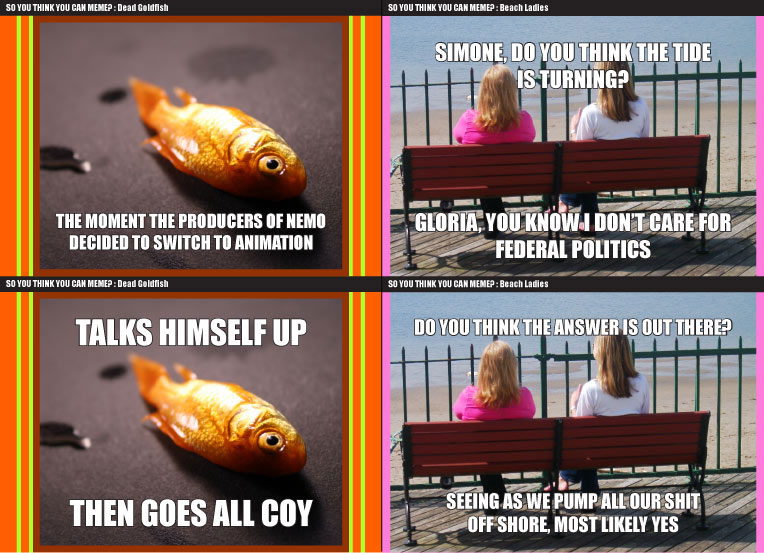 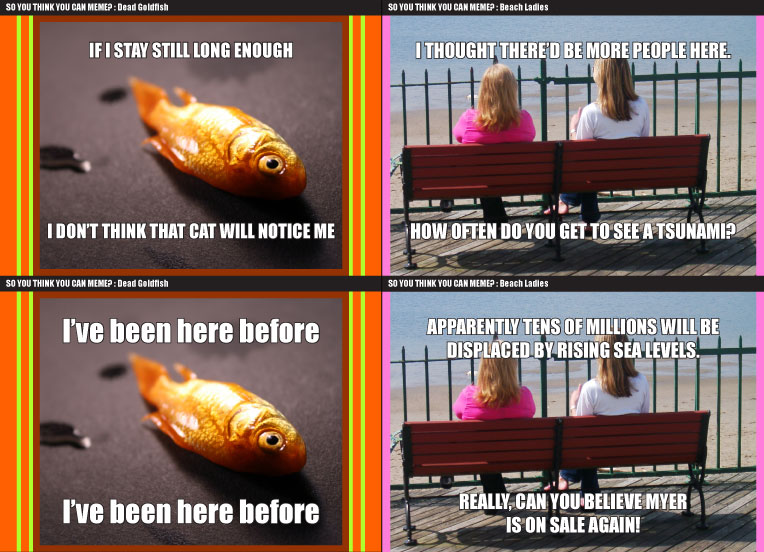 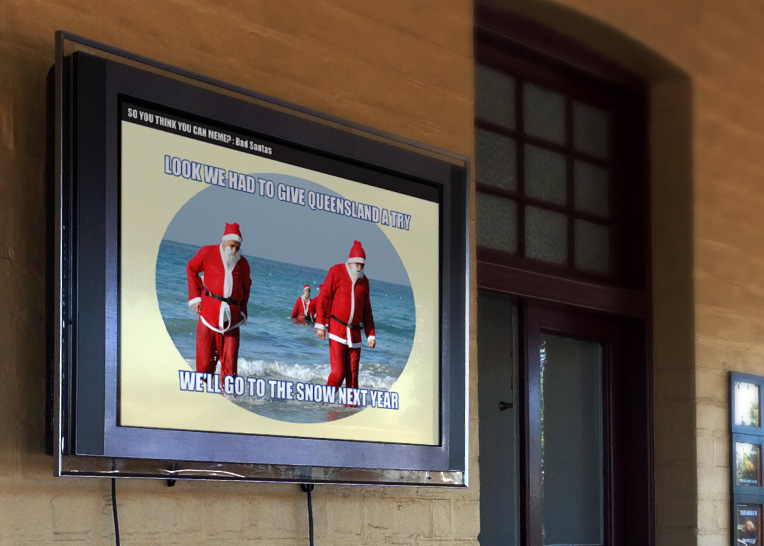 And did someone say #chillicarrot — not part of the State Festival at all, but there’s no reason why local retailers couldn’t support this event by staging complimentary theatrical interludes of their own.

So there’s our first State Festival and what a buzz.
Thank you Castlemaine for making this such a great place to live.