What We’re Arguing About

Children and the tidying of their room

Is there a difference between tidying and cleaning? I think there is. Gav would argue there isn’t. Now I’m the first to admit that Gavin is very good at doing little bits each day. Though he is a ‘piler-upperer’. Not a real word but a very real trait for scooping everything up in a pile and leaving it there. And not till he gets around to sorting through it and putting it where it belongs; the pile will stay there. Forever.

And me? Well I’m worth waiting for. I’d say that though wouldn’t I. When I get around to domesticity (full disclosure: it may be a long wait) not only do I tidy, I clean and I FILE. And there-in lies the rub. I’m one of those list makers who has a little black book (Moleskine preferably and yes I have tried other brands; an orange Rhodia cut it for a year with it’s cute little inverse rounded perforated corners you could tear off). (Actually I’m currently trialling a tricolour Delfonics.) I love crossing off the little tasks I’ve done — though let’s be fair sometimes they are enormous tasks like answering the accountant’s queries about our spurious (alleged) expenses. And filing; I should have worked in some government ministry during the war where everything was on paper, in triplicate, in rooms full of filing cabinets. I say I’m a little bit anally retentive, but ask Gav and he’d say I’m ineffective and nothing ever gets done I’d argue when I do do it, it gets done properly. A couple of years ago I made nice little labels for all our spice containers. A love of typography and order and container labels like this make me happy in life. I know I’m not alone in this. Anyway so Gav laughs at my labels. The irony is I didn’t actually need the labels as I know all my spices by sight and smell. It’s Gav who needs to know what’s in the containers. As some of the labels have come off over time (questionable adhesive) I can be in here at my desk and hear Gav shout at me from the kitchen “What’s in here?”. That’s right dear reader, I don’t even bother to sigh anymore.

Gav piles the dishes on the sink. When I come away from cleaning the kitchen, it’s spotless. So too is the sideboard AND the living room. But is this all encompassing tidy / clean / order worth waiting for? I think it depends on your own approach. Gav’s desk os a tip, mine is more often than not tidy as. Which brings us to those who learn by seeing then doing — our children. #1 is eight and #2 is four. Gav cannot understand why they cannot keep their own room spotless. I think it’s a nonsense question and can’t be bother formulating a response other than “they’re children”. But Gavin really does believe they should clean their own room. There’s also the added complication of when siblings of their friends come over and set off a bomb in the dress up box. Having two girls results in lots of pink, sparkles and fairy paraphanalia so at least it’s a pretty bomb site. I can totally understand why #1 would have no interest in cleaning up after the siblings of her guests.

It’s self interest why I like to clean their room — I know where everything is then. Everything has it’s own place. Gavin decided to help once … you know the rest. Sigh.

Well someone needed to say something

Without the instantaneousnessness of Twitter how else would have our 140 character verbal stoush been over and done with so quickly. Just as well I say, so we can all go back to our day jobs: you a multinational financial services firm worth US$14.97 billion headquarted in NYC with 63,000 employees worldwide; and me, well I dilly, and I dally, and I potter about in the goldfields of Victoria. I also spot MASSIVE HOLES IN YOUR MARKETING TACTICS, AND PULL YOU UP ABOUT IT, BUT YOU REFUSE TO ACKNOWLEDGE THE DISCONNECT BETWEEN WHAT YOU’RE SAYING AND WHAT YOU’RE DOING. But I’m not worried, business owners will see your con and realise you’re only PRETENDING to care about local businesses just so you get some PR.

Yours,
Indignant of Castlemaine

What’s that all about?

See a screengrab below of my twitter-sticks-and-stones with the 22nd most valuable brand in the world.

END_OF_DOCUMENT_TOKEN_TO_BE_REPLACED

Twas Marx that had a bit to say about the ownership of the means of production. Now to stretch that link a bit that’s the reason why we have a wordpress site. We wanted to have control over our content, and immediately. WordPress is just a boon for that. We got someone to set the site up for us and then we took over — and we haven’t broken it yet! Thing is once you get under the bonnet of WordPress it’s not all that simple, despite all their marketing promises. Now I’ve got the slightest of ideas about what to do in a Cascading Style Sheet. I was unhappy with the serif face we initially chose (Merriweather) for the site so I delved through the CSS and changed it to Arial. Good ol Arial. Or rather you poor bastard child Arial, spat from the loins of Microsoft who were too cheap to pay the owners of Helvetica a licence fee.

Cue: Gavin spitting the dummy and demanding I change Arial back to Merriweather.

Well I didn’t. And he asked again. And I didn’t. I never said I would. The great thing is that even though Gav can drive the basics of WordPress he certainly doesn’t know how to amend the CSS!

Anyway, as a compromise I’ve settled on Georgia. I’m about to investigate the Google font Bitter. So if the site looks like it’s got typographic schizophrenia that’ll be why.

Actually Liz, we settled (unsatisfactorily) for a font called Roboto Slab. More soon – we’ll be arguing over this for weeks.

Yeah so there has been a spanner in the works with this blog category. We argue about what can go up and what can’t. I forget what the last argument was about. Probably something about xxxxxxxxxxxxxx, { C E N S O R E D } wooooops, there I go. Better stop now …

I’m just puttin’ it out there; or rather, drinking it.

Ah, so where’s the argument? Is it  more important that it’s grown in Australia or that it’s pesticide free?  Mmmmm, food security vs not dying of a cocktail of diseases when I’m 55? What I will say is that the flavour is not as good as some other tea. Then again, I just need to get used to its particular flavour. Bit like beer — who loved that when they first tasted it? Anyway I buy it mostly because it’s grown here. 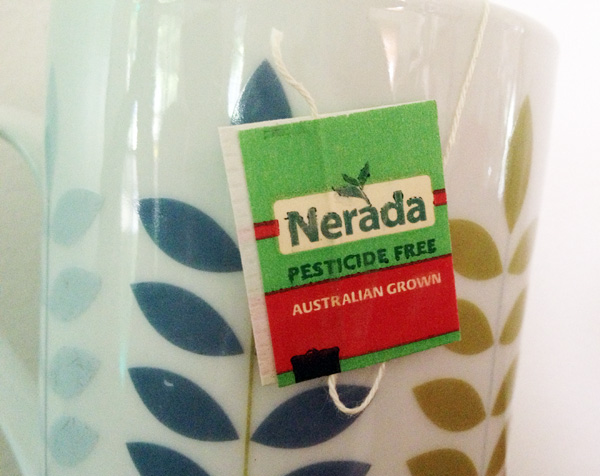 You can buy a tin of tomatoes in our local IGA for 69c. They’re made in, and obviously imported, from Italy. Or I can pay $1.15 for IGA Signature tomatoes — product of Australia. Or $1.39c for a tin from SPC — the canning factory up in Shepparton (VIC) about 90 mins away. The thing is, on this can, it says ‘Product of the USA’. How’s that work?  Finally I can pay about $1.74* for a tin of Ardmona tomatoes (aka SPC) made from Australian fruit, grown and packed in Australia by Australians. Nice. Thank you very much; I’ll have two. I’m serious, I’ll buy the Aussie product every time.

I completely understand why you’d buy the 69c tin. In the past I would have been inclided to buy them because the label was more aesthetically pleasing. Oooops did I just say that out loud? Shame on me. Maybe not the Black&Gold label shown below but some of the Italian labels are rather sweetly retro.

But back to the economics of the household purse. “Gav says buy the 69c tin. Why pay more?” I’ll tell you why we should pay more.

#1’s art teacher’s parents live in Echuca. They’re tomato growers. Their crop goes to a local cannery like SPC. But guess what: times are exceptionally tough for Australian tomato growers. Why? Apart from another barrel of fricking ballistically angry gorgons called the Murray Darling Basin Plan, people aren’t buying Australian grown and packed tinned tomatoes. They are considered expensive compared to the imported product. But is expensive the right word. I doubt SPC are paying their shareholders a motza. The prices reflect their costs. Also, the high Aussie dollar so export costs are higher. How about feeding those at home first? Not worth it mate.

But am I buying Australian? SPC Ardmona is owned by Coca Cola Amatil. Well I am supporting Australian growers and families who work at the factory and that’s all I can do barring growing my own. Which I have done in the past but I found tomatoes a bit like buses; you know none forever then they’re here all at once. And SPC Ardmona export to 30 countries don’t you know.

But here’s the kicker (aka conspiracy theory) which shouldn’t dilute the Buy Australian argument. I don’t know much about the EU system of subsidising tomato farmers in Italy but I do know that the biggest drug hauls recently (2008) discovered entered Australia in tins of tomatoes. The haul: 4 million ecstasy tablets. Bummer for clubbers. Maybe it’s not the Italian government subsidising Italian tomato growers but an even more successful Italian organisation with an interest in maintaining a stable export market for smuggling porpoises.

Buy Australian made and owned please — and of course I don’t just mean tomatoes. You’ll be supporting families. And somewhere along the line you know these people, or know someone they know or are related to.

*These are comparisons for the same type of tomatoes — non-organic, whole, skinned and without any other fancy stuff like garlic and herbs.) It should also be noted that I have heard the main Castlemaine IGA referred to as ‘the most expensive supermarket in the world’. I used shop at the IGA Glenferrie Rd, Hawthorn, so, after comparing demographics, the claim about the Castlemaine IGA is not hyperbole.

END_OF_DOCUMENT_TOKEN_TO_BE_REPLACED 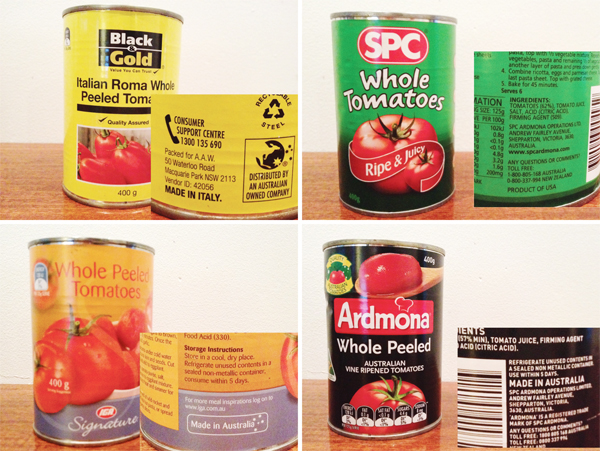